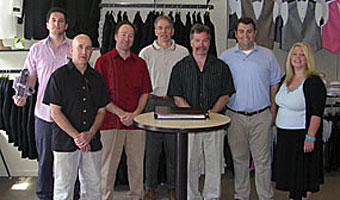 When our Grandfather, Donato, emigrated from Italy in 1926, he opened his shoe repair business on West 7th Ave. Our father, Vince Sr., began working at the store the following year when he arrived in the U.S. In the 1940’s, our dad took over the business when his father became ill. After our parents were married in 1950, our mom, Teresa, began working at the store too.

The 70’s were hard years for Conshohocken. Lee Tires and Alan Wood Steel along with many other industries went out of business and thousands of jobs were lost. Instead of moving out of town, our dad expanded the business and stuck it out through the tough times. He loved Conshohocken and had no intention of leaving. He ran the business until his death in 1986.

We’ve all grown up working here at the store and we too feel the love and pride our father had for our business and for Conshohocken. We continue to live and work in this community and think our father would be proud of what this town has